Last week while in Los Angeles I attended a pretty cool event at the LA office of Nettwerk. It was called The 2008 Music and Millennials Panel and had an interesting format. A surprise band put themselves completely out there for a panel of music industry professionals (including 80-100 in the audience) to critique their music and business strategy. The panel was moderated by Terry McBride (CEO of Nettwerk) and included a music publicist (Mitch Schneider, MSO), an entertainment lawyer (Dina La Polt, LaPolt Law), a promoter/venue owner (Mitchell Frank, president and founder of Spaceland Productions) and a music supervisor/label owner (Alexandra Patsavas, Owner of Chop Shop).

The band was given about 20 minutes to bring us up to speed on who they were, what they sounded like, what they’ve done so far as a band and a the different ways they’ve been marketing themselves in this changing music industry. The panel was then brought up on stage to inspire more discussion and ideas on what kind of things the band could do going forward to be more successful. A lot of really interesting points were brought up, but what really stuck with me was the importance of making that connection with music fans, as Terry mentioned, they are your record company. How a band interacts with the audience through socials networking sites, blogs, youtube videos, remix contests, iPhone applications is the now and future of this bands who want to last in this music industry.

The band was The Local Natives (from LA) and I thought they did a great job as our test subjects. They’re a five-piece band who channel energetic, percussion-driven indie rock. Think earlier Annuals, Broken Social Scene or Beirut with the harmonies of Fleet Foxes. They’ve been touring the West Coast of the US a couple times and had some spins on MTVU and MTV2 Subterranean for their video ‘Who’s There’ (check it out at IndieMusicFilter.tv). And they now live in a house called Gorilla Mansion.

I picked up a 4-song ep at the panel and it got some considerable airplay in my rental car last week before heading back to Toronto. As a taste, check out Airplanes. I’d also recommend a track called World News, but you might have to go looking for that one. Finally, if you live in LA, this band plays tonight at the Silverlake Lounge (doors at 9pm, they’re on at 10ish). 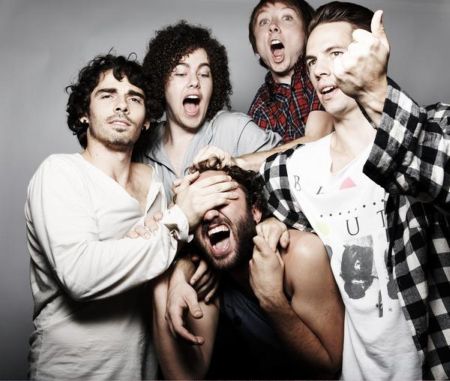