I was looking into some shows happening in Toronto in the next little while, and I came across this. Wavelength, an institution for new music on Sunday nights, is celebrating 350 gigs by throwing four shows in four days (Feb. 8-11th). This celebration is a little while off, but I liked the lineup on the Saturday night at Salem’s Loft.

New Toronto venue, let me introduce myself. My name is Chris and I’ll be up at the bar, looking for drink deals and trying to find a nice pocket of sound to hear bands perform.

You can tell I’m a fan of Think About Life, and we have an AnimalMonster demo kicking around in the office that is pretty interesting stuff. I wanted to know more about The Winks. I did know that Connor was a fan, that’s generally a good sign that I’ll probably like it.

The band is centered around a core couple of Todd MacDonald (Mandolin and Vocals) and Tyr Jami (Cello and Vocals) with a rotating cast of players helping out live or in the studio. If you check their myspace page, you’ll notice that out of all the people they have performing with them, there isn’t a guitarist listed. How often do you see that?

They put out a record in November (Ache Records), which has one some of the nicest album artwork I’ve stared at for longer than a second. From what I’ve heard of the record, its what happens when you mix together Bright Eyes, Decemberists, Anathallo, Islands. Enjoy.

**Disclaimer. These tracks might not get you right away. Give it a couple listens. Check out Guitar Swing and Slumber Party Lets Go. 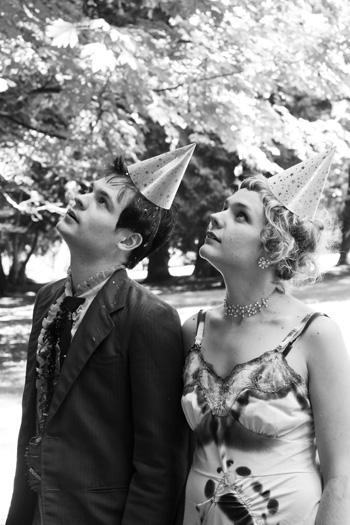