Something About Wolfe Island

I know it, this is going to be my favorite festival to go to ever summer….. its not just the bands (Wolf Parade, Holy FucK, Apostle Of Hustle, Born Ruffians, and more) and the low ticket price. Maybe the purple bandanna I was wearing that day was too tight, or the sun and booze combination. Something about that island, it held some indescribable vibe.
The pieces.

–the ferry ride over was windy. I had a perfect opportunity to dry all of my back sweat (from the drive in leather seats) by angling my right sleeve to the exact angle into the wind
–we found the perfect camping spot, right in the middle of a field of dandelions. as soon as the tents went up, we hit the smuggled-in booze right away
–i witnessed a horrible fight between two dogs, an angry medium-sized dog (who we later named Barbaric) clamped his teeth down on a Shitzu’s neck, tossing the dog wildly in the air. it was horrible. happy ending though, the fight was broken up and both dogs were fine.
—Basia Bulat was really great to see live, finally. Really talented singer.
–I balanced a unicycle on my chin (which I realized in hindsight was a horrible idea….)
—Born Ruffians made people get on their feet
–it was incredibly easy to bring mixed drinks into the concert area.
—Weeping Tile re-united for this show. Was great to hear those songs again.
—Apostle Of Hustle finally got me as a fan (it took three tries…)
–everyone was so relaxed and laid back
—Holy Fuck got everyone dancing
—Wolf Parade treated us to some new material (including a 12 min song….)

Head over to Chromewaves to hear his take. 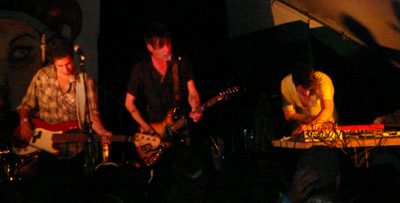