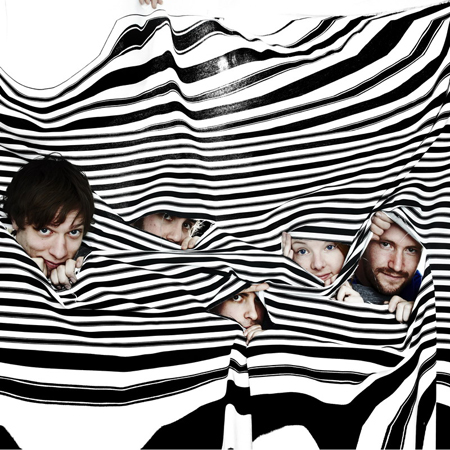 Ever been to one of those house parties where there’s a band crammed in the corner surrounded by people going nuts? Me neither. Most house parties I’ve been to didn’t include a band. I did however put on 4 bands at a houseparty, but there wasn’t room for dancing and the music didn’t fit.

These parties do exist. Coming to a town near you, check out video evidence of Green Go. *Apparently, only a few people at this party had ever heard the band before they start playing to the audience.

From wowing unsuspecting houseparty goers, to putting out their debut record ‘Borders‘ (Pheromone, April 28th), this Guelph 5-piece has come a long way in a short amount of time. The bands’ presence grew and they started appearing at Canadian festivals and opening for bands like Woodhands and Think About Life. Their recordings evolved from a DIY self-titled EP to a great sounding, indie-punk banger in next week’s release ‘Border‘s. And I’m seeing their name everywhere.

I spent some time with the record over the last couple of days, and it really had me going. Leading off with a Pink Floyd meets Air tripper in the title/lead-off track, the listener is completely thrown head first into an indie-rave when track 2 (‘Put Your Specs On Boy‘) comes crashing in. The record features catchy synth lines, disco drums, cowbell, handclaps and the collective shouting of a band that is trying to get a reaction out of you. For fans of bands like The Rapture, Spiral Beach, or The Music, here’s songs for people looking to have a little fun.

Specs (above, and in video) is a great track, but I’m really digging the album’s oldest tune, Brains For Breakfast. You know those Arcade Fire songs that start slow, then end in some kind of disco-dance number? Here’s just the 2nd half. As soon as I learn the lyrics, I’ll be shouting along as well.

The contest: Recently Green Go put together a remix project where they redid a songs by a bunch of Canadian artists. We even wrote about it here. Send me an e-mail with two of the bands that they remixed, I’ll draw a winner after tuesday (the 28th) at midnight.

Winner wins two tickets to see Green Go perform Thursday, April 30th in Toronto at Wrongbar (with The Magic, Everything All The Time) and a copy of the album ‘Borders’.