Holy Fuck! I made the cover of NOW Magazine!!

Isn’t this a wonderful family photo?

I attended Now Magazine‘s 25 anniversary last night at the Phoenix. It passed all my qualifications for a good industry party.? Some free booze, interesting entertainment, and live bands. When you came into the venue, they had these photo areas set up where you could get your picture on the cover of Now. Here’s what Ian, Steve, myself and someone who would like to remain anonymous looked like….

One of the bands playing last night was Holy Fuck. Sadly, I spent most of their set in line, only caught the tail end of their set. I’ve seen these guys on numerous occasions in Toronto and at music festivals. One of the most captavating live shows you can see these days, mainly because when you are dancing to the beat, you wonder who is making what sound, and what kind of instruments are they playing?

Here’s a track called Casio Bossa Nova from their new record. Two others can be found on their myspace. 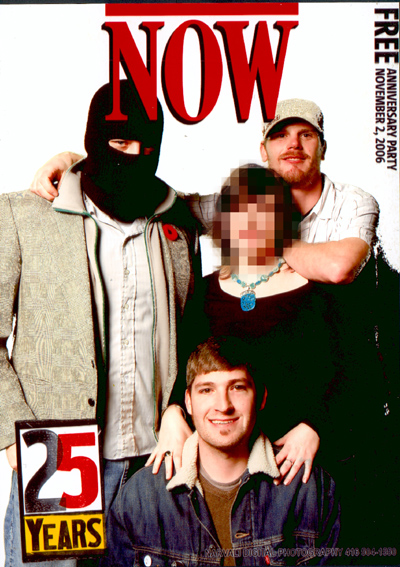