I’ve gotta mention a feat accomplished last week by a co-worker. Jason Furman, against all odds and nay sayers (and in record time), consumed a ‘Coronary‘ burger last week at Dangerous Dan’s burger joint at Queen and Jilly’s. (Anyone know the east end of Toronto?). So that’s

He also did it in less than 15 minutes. Very well done. And looking back a couple years, I’d like to also recognize two other friends, who on seperate dares, consumed an entire container of Aunt Jemima syrup and a pound of butter.

You know who you are.

On friday I found myself at the Horseshoe Tavern, there to see the Russian Futurists. On advice from one of the forementioned (butter), I arrived early to check out a three piece band named Born Ruffians. They stole the show.

Honest energy with quirky, well written songs. And it moves people. Forward, then back. Then side to side, in some sort of pattern.

Take a listen to This Sentence (it loads up automatically on the bands website to be..) 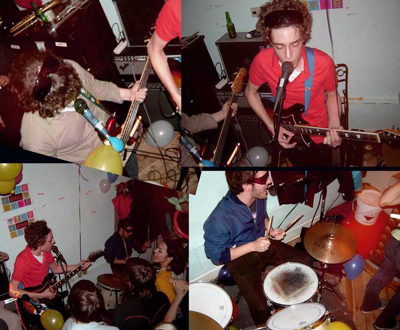