So I recently figured out that Rolling Stone and Spin covered this topic a couple of weeks ago. I have to admit, I was hurt that neither let me know before going ahead with their respective features on the music of Weeds, my new favorite TV show.

In case you missed their write-ups, here’s the deal:

Weeds is a weekly comedy / drama produced by Showtime that follows the life of a suburban mom (played by Mary Louise-Parker) trying to make ends meet by selling marijuana. It also stars Kevin Nealon, and a host of other talents. I can honestly say it’s one of the funniest shows out there right now, so please check it out (In Toronto it can been seen on Showcase Network Wednesdays at 10 p.m.).

One of the great things about the new season (2) is that the theme song, Malvina Reynolds‘ version of “Little Boxes” is now being done by a different artist each week. Not just any artists, cool artists – here’s the lineup so far:

One really annoying thing about Showtime Television is that they limit their web page access to Americans only, so if you’re trying to access their page from Canada or anywhere else in the world try using an anonymous proxy service like Hide My Ass.

Aside from the Showtime Television page you can listen to all the music for the show at their MySpace Music site. 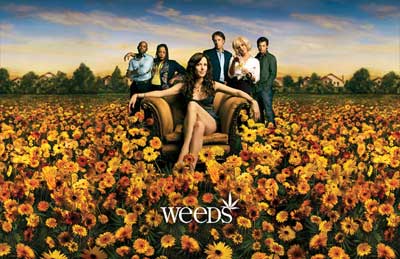