empire state of it

I noticed that a new song of mine has the same chord progression as Jay-Z’s brilliant Moments-sampled new track. So I upped the BPM of the original from 86.65BPM to 105BPM and added some more samples; taking Dan Deacon’s Slow With Horns and speeding it up considerably and pitching it a few cents and also, for the second verse, I noticed Empire State is in F#m which is the same key as Michael Jackson’s Billie Jean so I took the otherwise minor sounding bassline from Billie Jean and put it under the feel-good majors of Empire State. I added bass, organs, vocoder, and my voice and had some friends help with the gang vocals for the chorus and I re-sampled the drums from Empire to make a new beat out of its sampled drums. I would have liked to speed it up more like to 120BPM but the vocals sounded silly sped up that much and there aren’t any official acapellas released so Jay-z’s vocals over my chord progressions are the best I could clean them up to be from the really lo-fi DIY one I found on the internet. Hope you enjoy it.

Canadian Music Fest has announced its first round of confirmed bands for the 5 day festival/conference in March. One huge list of bands I’d never want to see and bands I can’t wait to see. 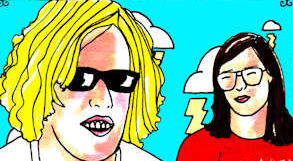 Free Energy are on Daytrotter.

Hear some new music from The Album Leaf called Falling From The Sun off the upcoming release of Chorus Of Storytellers (Subpop).