Artists who want to produce concept albums often bite off more than they can chew. Fortunately the latest release by New London Fire doesn’t have this problem. If you enjoy the musical wonderment of Duran Duran, Depeche Mode, and classic U2, or perhaps just like being occasionally reminded of Midnight Oil, then this band might be for you. Their debut album just released on Eyeball Records, I Sing The Body Holographic is a solid follow up to their EP, A Wave Form. Expect a bit of everything from anthemic dance tracks, to synth driven pop rock.

On a more current note, if you think Brandon Flowers is on the right track with the Killers, I suggest two things. First, remind yourself that the Killers are the most corporate amalgam pastiche of 70’s and 80’s AM pop rock to crop up in the past 10 years. Secondly, consider the fact that either the Killers appeal to everyone because they’re better than everything else, OR, they’re the band that’s been pushed in front of you more than any other. Personally I’m betting upon the latter. My point is, there’s other musicians doing similar things, in a more genuine fashion, with greater depth. Perhaps looking for depth in pop is a bad idea, but somehow I can’t escape my nature. The cinematic music of New London Fire is something you can fall into.

Now for the weird story about New London Fire. Apparently they got their name from a conversation between front man David Debiak and Mike Way, the bassist for My Chemical Romance. Way asked Debiak and his brother Jason (2/3rds of indie act Sleep Station) to put together a Brit Pop group for them to play together in and name it New London Fire. The Debiak bros eventually got around to forming the group, but Way has been busy touring with MCR and when asked if they could still use the name he agreed.

You can download the single, Different, here from the band’s label site. Here’s a link to the video on purevolume. Also check out some more of their work on their myspace page. 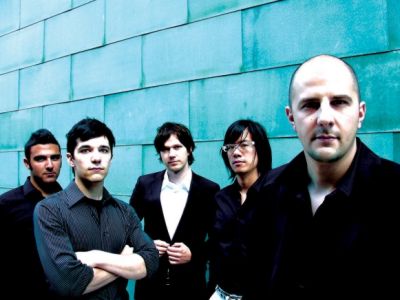