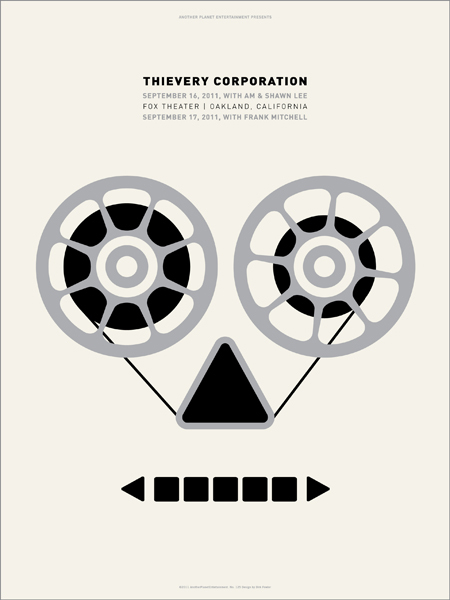 A lot of the time when I make these posts about poster designers, I find its easiest to just paste what they’ve written about themselves on their hompages.

Well, we’re not a world-wide, mega million dollar, corporate machine and that’s for sure! We’re just two simple people. Dirk and Carol Fowler. In fact, that’s how we got our name. Two Fowlers = f2. Clever, huh?

We live and work in sunny Lubbock, Texas. We kind of like it here. It’s quiet.

Once Carol met Hermann Zapf. She was pretty excited about that because she likes type… A LOT, and turns out so does Mr. Zapf. Carol likes to make type look pretty on brochures and other foldy things with lots of words on them. Her clients like them and make lots of money because of her. Not too many people care as much about letters as she does. That’s a good thing.

Dirk makes a whole bunch of posters using an antique letterpress. Some folks say he’s like an old man stuck inside a young man’s body. What they don’t know is, he’s really not that young anymore. In 1979, Dirk had a drawing published in Jack and Jill magazine and his Grandma called everyone in the county. He’s had a bunch of stuff in a bunch of magazines and books since then, but that one is still his favorite.

Check out the posters on their homepage.