I had the pleasure of starting off my Friday night at Spin gallery. Art, music, and $4 dollar beers.

By the way, before I forget, has anyone ever heard of or had Labatt Honey? Tastes like blue with honey in it. Which one of my brothers couldn’t take drink because he’s convinced he’s allergic… to honey, not blue. Maybe both.

The art on the walls were some recent works of James Mejia, Chad VanGaalen, Brian Borcherdt and Julie Fader. Julie played an acoustic set to start off the night. Brain did a set later on as well. In between Chad VanGaalen performed.

Chad‘s been playing music for 10 years in Calgary. His last record you’ve probably seen in the stores is called ‘Infiniheart‘ which Sub Pop rereleased in 2005. Not only is he a great musician, he’s a very good animator as well. Check out his work on ‘Clinically Dead’.

Check out these tracks.

>> Not sure who he was drawing here, but it kind of looks like Jose Gonzales. 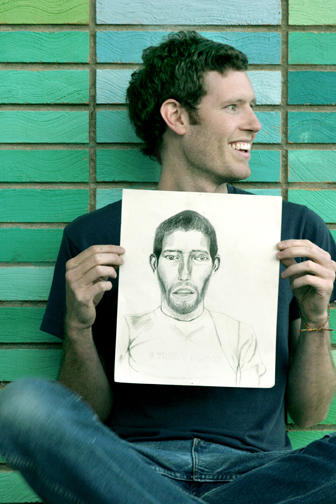