This remix was stuck in my head all weekend.  Check out Spanish electro-pop producer Delorean remixing the gorgeous song “Lovers” by compatriots Gold Lake.  Watch a video for the original here or read more about the remix at The Line Of Best Fit.

Alpine on Yours Truly / Rdio

Sweeter than an apple-patterned jumper on a hot Austin day, the bond between Alpine’s front-women Phoebe and Lou was a direct example of the types of conversations their songs intend. Between fits of laughter, flashing winks, and brow raises, these delightful Aussies were a solid, smirking team with or without words. At the mics their delicate voices transform into an audible bond; a friendship that seamlessly treads intervals, deciphers lyrics, and finds harmony to complement whatever rhythm the day may bring.

This session is the third of four, filmed in partnership with Rdio during SXSW. Visit on.rdio.com/alpine to hear the exclusive session featuring “Lovers 1” and other tracks performed that day.

Alpine “Lovers 1” from Yours Truly on Vimeo. 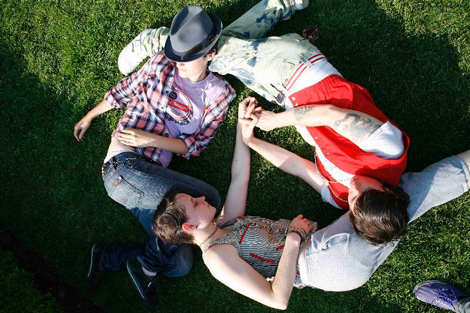 Lovers didn’t get me on the first listen, but I’m glad I went back. The Portland, OR all female trio will be releasing thier synth-heavy new full length called Dark Light on October 12th (via Badman Recording Co). Led by singer Carolyn Berk, the album was recorded at Portland’s beloved Type Foundry studio with Badman label owner Dylan Magierek (Mark Kozelek, Thao Nguyen & Portland Cello Project) and is a great step forward for the trio (that also includes synth-programmer Kerby Ferris and percussionist Emily Klingan).

Check out “Don’t You Want It” (for fans of MNDR, Tegan & Sara meets Cindi Lauper)