Muse is a phenominal live band. They had the biggest crowd for their set, probably because Starsailor was their competition playing on the other stage. Pumping out great new tunes like ‘Starlight’ (who was playing the piano on that one?) and ‘Supermassive Black Hole’, the crowd approved and showed their affection by jumping up and down in large bunches. I always find it amazing when 3-piece bands can sound like 5 people on stage. Maybe it had to do with the sick gear that guitarist and singer Matt Bellamy was switching up every song.

One of the best tracks live was ‘Knights of Cydonia’, the last track off the new record. Really awesome video for this one (unicorns+robots=westerns?). 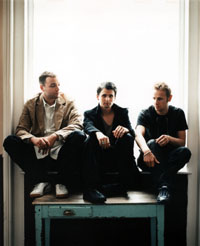 Beer lineups. We can’t avoid them. We can only try and deal with them.

Wintersleep was another highlight of the day. Even though they had an early set (2pm) on the smaller stage, a good crowd came out to catch a short set by the band. Playing a mix of old tracks (‘Jaws of Life’, ‘Nerves Normal, Breath Normal’) and new (‘Ghost?’, ‘The Murderer’) the crowd looked/danced/rocked on in good fashion. It was drummer Lowell Campbell’s birthday as well, probably extending the crazy drum solo in ‘Nerves Normal, Breath Normal‘ as a birthday present to himself. It was a great present to us. 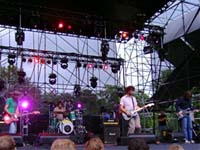