The Noisettes Build A Bridge To Canada

One of the most interesting (and perhaps exaggerated) stories I’ve ever heard in the music world, describes how Henry Rollins joined the seminal punk band Black Flag. Rollins attended a show with his friend Ian MacKaye (founder of Minor Threat and Fugazi) and decided he wanted to sing on stage. So he got up and knocked out Dez Cadena (the original singer) and replaced him, for the rest of the night and the rest of the band’s existence. 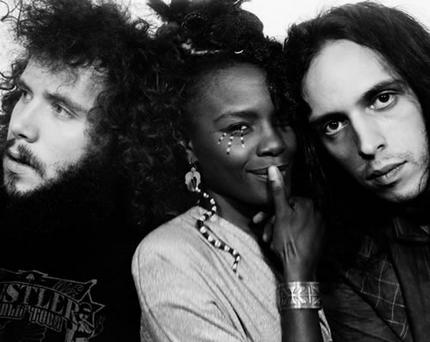 The Noisettes were formed out of a similar, though much more tame, situation. Attendees of the British Croydon Music and Stage School, front woman Shingai Shoniwa decided to pull quiet guitarist Dan Smith (whose father once jammed with Jimmy Page) to dance on stage with her during a school music recital. The performance was being put on by a group of student “superstars” that now happen to be members of UK contemporaries the Feeling.

Add burlesque choreography to Shoniwa’s curriculum vitae, and the fact that she often plays her guitar with items like loaves of bread, and you quickly develop a picture of someone out of step with the musical mainstream. Smith was smitten by Shoniwa’s vitality, and following a series of impromptu noise-jazz gigs and the addition of drummer Jamie Morrison (who spent his teenage years playing drums locked in his attic), the Noisettes were formed and ready to rock.

The first track that caught my attention by the band was the rocking tune with a Canadian flavour: Bridge To Canada provided here thanks to the Rocksuckers. Feel free to check out the band’s myspace page here, and check out their official site for videos and other musical downloads. Ironically, given the song I mentioned, for those of us north of the border, the Noisettes won’t be making it to Canada on their current tour. Hopefully they will in the near future.