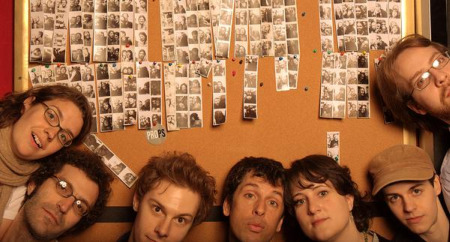 Got a tip a few weeks back from Hey Rosetta‘s manager about good music from a NY band called La Strada. The two bands have been touring together recently and from what I’m hearing in La Strada‘s music, it was probably a great sonic fit.

Diving into their story a bit, La Strada were formed in early 2007 and quickly started making a name for themselves as purveyors of ‘raucous, foot-stomping shows’. Sharing the stage with bands like Takka Takka, Sharon Van Etten, O’Death, and Bowerbirds, the band turned a great local reputation into a record deal with Ernest Jenning Record Co. with their full length debut ‘New Home’ (out in April). Recorded at Miner Street Studios in Philadelphia and The Buddy Project in Queens, and produced by Kyle “Slick” Johnson (Cymbals Eat Guitars, Modest Mouse, Fischerspooner), ‘New Home’ is a 13-track album inspired by everything from African pop to French pop, folk tunes to indie rock, Brooklyn life to travels abroad.

Look for a SxSW appearance and a brand new Daytrotter session posting soon.