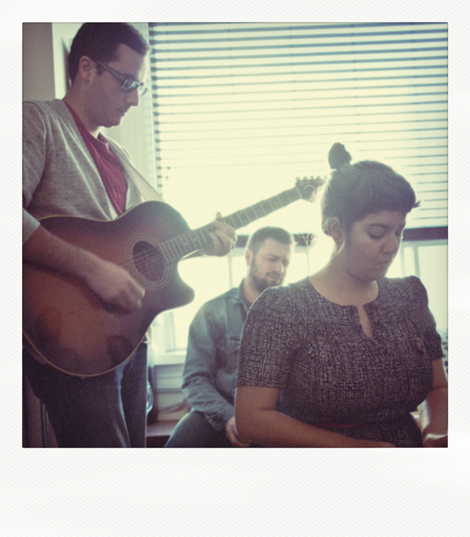 I spent a good chunk of saturday afternoon hanging with my blogger brethren at Lauren and Kevin’splace. A couple months back I was asked to join a group of Toronto Indie Bloggers, who wanted to make time to get together and hangout, outside of places we normally see each other, ie. loud concerts where you can’t really keep a conversation going too long. Hence, the monthly brunch was born and since I’m not good at attending each month, I figured I’d make up my poor attendance by bringing a pitcher of smoothies with a dozen croissants.

I walked in from the front door into the bedroom, where a band was set up, ready to perform! It was kind of a surprise to just about everyone. The band (Code Pie from Montreal) had a date cancelled on their tour and Lauren wanted to help them out with another show. Not having the biggestapartment, the five-piece band was forced onto and around the bed, performing acoustically, with only the bass and keys amped minimally. The show was great. I’m a huge fan of intimate and interesting shows and Code Pie adapted accordingly. Us bloggers stood and sat on to watch, listen, video tape and shoot.

There were a number of songs they performed that Irecognizedfrom listens to their upcoming release of Love Meets Rage, including this track which stood out the most. Check out “Operator” and look for the album sometime in early 2011.

Also, head to the bands’ bandcamp for a free download of Love Meets Rage b-side “No Such Love”.

and thanks Frank for the pic I stole, which I then turned into a polaroid (had to add my own little touch to it).