What Am I Becoming?

I’ve always understood December to be a slow time for bands releasing new singles, as most blogs (including mine near the end of the month) seem to be focused on best of and year end lists.  This year feels different. No shortage of great new tunes…. yet.  Case in point, this new single from POP ETC.

“What Am I Becoming?” appears on the trio’s upcoming album Souvenir (out Jan. 29th), their second full-length album as POP ETC (previously The Morning Benders). The album holds a pervading sense of catharsis—and learning how to find it, recognize it, and keep it, as we grow. Singer Chris Chu, along with his bandmates, Jon Chu and Julian Harmon, explored so much new turf during the writing process, he thought it only fitting to continue the trend while recording. Chu and company set up shop in his Brooklyn apartment to record the majority of Souvenir at home. Naming the makeshift studio “Headphone Cave,” they committed to tape almost all of the tracks except drums and certain vocals there, a process Chu found incredibly liberating especially in the context of the multitude of material.

“What Am I Becoming?” was one of the final tunes completed for the album and was the result of a serendipitous revisiting, and as such Chu identifies it as one of the most confident moments on the album, as he, his brother, and Harmon were reaching their collaborative peak. “That song feels very much like a product of us working at home, following our instincts wherever they took us,” he says. “I think because we were really able to explore each song until it felt 100-percent perfect to all three of us, it feels really natural even though it came together in a fractured way.”

Keep It For Your Own 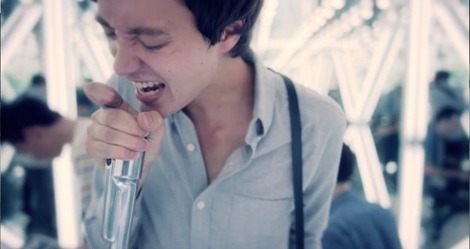 “Keep It For Your Own” by POP ETC.