This is not a post about a band, more like a snapshot into a way of life.

Every year for the past four I’ve spent at least one night of my Thanksgiving weekend at the Rockton World’s Fair. Originally started in 1852 in the tiny town of Rockton as just an agricultural fair, the event has grown over the years to host more than 100,000 people visiting every October.

I think there are a lot of people (including me) who come for the demo derby. I’ve got to say, there is nothing quite like watching 25 cars smash into each other. Familiar sounds are the popping of exploding radiators, the sirens of officials clearing the track of ‘hazardous’ wheel and axles, and the roar of the crowd tightly wrapped in sleeping bags and blankets.

The derby went three heats, two consolation rounds and a final. I couldn’t even really tell you who won. I do remember the roll over competition though.

Before the final heat, we were introduced by the announced to the roll over competition. Here the goal is to drive a compact car up and off a one sided ramp, flipping the car in the air. Points are awarded for how many revolutions the driving completes, as well, if the car keeps running.

Example, Jimmy John goes off the ramp, rolls over one complete revolution and drives away. 2 points for each side (2 x 4), 2 for keeping the engine running, 10 points total.

There were six competitors, all of which travel from fair to fair competing all season for points. I was interested in the pink car (see below), the only female competing in this event. She had never successfully completed a roll over before this night.

Jump 1. A dud. She broke the ramp and landed back on four wheels.

Jump 2. Another dud. She slid up the ramp on the under belly of the car and again broke the ramp.

Jump 3. Classic. While heading up the ramp, she hit the brakes and stopped in the position you can see below. Up on two wheels, with one perched on the jump. The ground crew (under pressure from the announcer) walked over to her car and pushed it over, upside down! Then right over again, back on to the wheels! You could see her bounce around in the drivers seat. 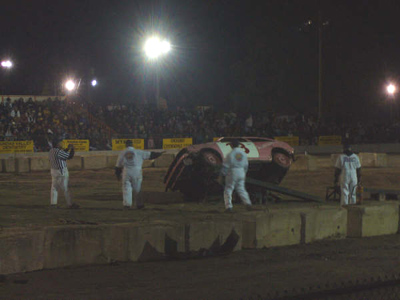 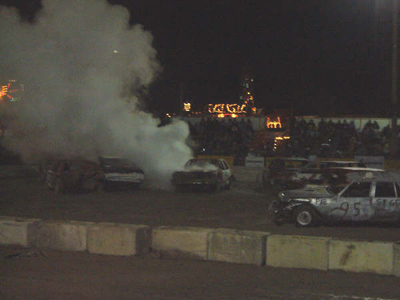 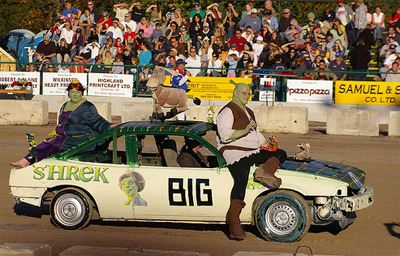