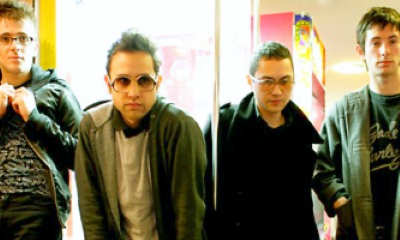 The Mint Chicks are a transplanted Kiwi power trio that originally met up at Orewa College in New Zealand, and hail from Christchurch. Originally a four piece consisting of Michael Logie, Paul Roper, and brothers Kody and Ruban Nielson.

They are signed to the Kiwi label Flying Nun, and have toured extensively playing major festivals down under, and opening for the Yeah Yeah Yeahs, the White Stripes, Death From Above 1979, TV On The Radio, Blood Brothers, The Black Lips, and the Bronx. Now, despite having never played in a recording studio or with a producer, their DIY ethic is carrying them forwards. They’ve recently played SXSW in Austin, Texas, and have been playing shows in Portland, Las Vegas, and other various western U.S. locales.

Check out the award winning video for Crazy? Yes! Dumb? No! below (*Wolf Warning – due to Chris Budd’s love of all things lupine, I felt the need to make this disclaimer*), and take a listen to their new single Walking Off A Cliff Again. You can also check out some more tracks at their MySpace Page.