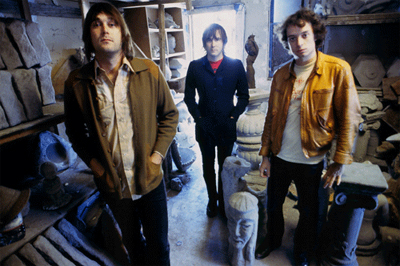 Three guys in the band and none of them are are named Blake. Go figure.

Gillian, good work again. You’ve tipped me off to a great band and brought me to a solid show. That was the Blakes show at The Silver Dollar last night in Toronto. I had heard some of the band’s music previously and had made a note in the blog to go back and listen again when I had more time. But really, I was a blank slate walking into the bar.

Comprised of the Keim brothers (Garnet on guitar, Snow on Bass) and Bob Husak (drums), The Blakes capture raw sounds of 60s Brit rock, garage and the melodic side of punk. Many bands came to mind during their energetic set; one moment sounding like The Kinks or The Who and the other sounding like The Strokes of The Smiths.

The crowd was really quiet in between songs. Maybe we were shy? The band really noticed and tried to figure out how to engage us more. Eventually, fans were shouting out requests, including Gill who really wanted to hear Lintwalk. After denying her intially stating ‘they didn’t play that song anymore’, they worked it into their set. Here’s the video.

My favorite track I’ve heard so far is Commit, head to their myspace to stream it (Looks like they’ve got all their tracks up there). As well, Don’t Bother Me is a solid track, check the machine, its there. Download Two Times off their self-titled album below.