“The city of Toronto had a nice, laid-back atmosphere. Very friendly people, good second-hand shops and sunny, crispy weather. It was actually a lot like Helsinki, just eight times bigger.” 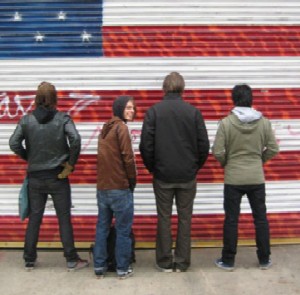 That’s what Finland’s Disco Ensemble had to say of their visit to T.O. in their online journal posting following their trip across the pond.
Now the ironic thing here is – if you read their posting – they say they played at Kathedral, and then the Bovine Sex Club. According to the CMW listings, the only show they played was at the Drake Underground as part of Friday’s Finnish Music Showcase – which I managed to not attend as a result of irritatingly, incompetent bouncers that insisted the entire bar was “full”. I managed to find out two nights later that the Underground was half empty at the time I decided to pull the plug on my evening.

Either way, this sharp edged group from Finland were brought to my attention by my girlfriend last week, and upon listening I think they deserve to be shared with the rest of the internet I have access to… via this site of course. I’d suggest one file them under the same section you’d slot Scandanavia’s more successful musical products such as Mando Diao, Millencolin, the Hives, the Sounds, or Refused. This should come as no surprise considering they pattern their sound after Refused and At The Drive-In, and their most recent release, First Aid Kit, includes recordings made with the help of Hives Producer Pelle Gunnerfeldt. Personally I quite enjoy We Might Fall Apart, and This Is My Head Exploding, which you can check out on their myspace site here.
Next Time they are in town I’ll buy my tickets in advance so I can avoid bouncers without brains.

« Currently Listening To » Near the end of SXSW