Being Here by The Stills 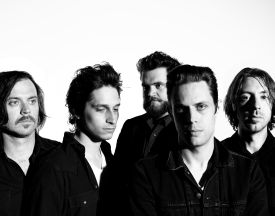 Who : The Stills from Montreal.

What : Some new music from Montreal’s The Stills . Its been a while since we’ve heard from theses guys, but you can feel them ramping up. This new track (Being Here ) is from the bands third studio record Oceans will Rise (Aug. 19th, A&C ), produced by Gus Van Go and Werner F . Some Canadian dates in June, check the myspace .