Blogspot by Paul And The Patients 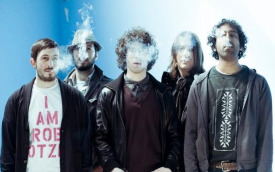 Who : Paul and the Patients from Brooklyn.

What : This song has been bouncing around in my head all day. From what I can tell, its written about the exact thing I’m doing right now. Paul and the Patients are a Brooklyn-based band that started from initial bedroom songs written by lead singer Paul Holmes, to forming a band around them (The Patients are Dave Greenwald (Drums), Jay McBride (Guitar), Pete Swan (Bass), and Josh Ascalon (Synths, Vocals)). American Myth Recordings (Lissy Trullie) liked what they heard and are putting out the bands’ self produced EP (To The Lions ). Your soundtrack to ‘late night outings to poorly lit bars and the guilty gray mornings that follow’, everyone, tell everybody.