Break from Bearsuit, Around The Blogs 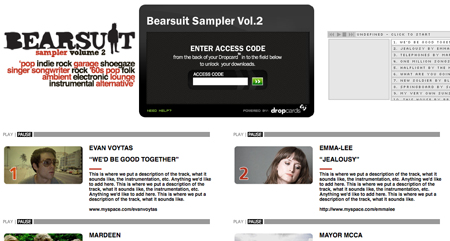 Working on a sampler CD for Bearsuit at the moment. Actually, its technically a drop-card, which have been manufactured and are heading to Toronto as we speak. The website (where you enter the unique code on the card) is almost done. Pretty happy with how it looks. The album? Great mix. Hopefully I can get some good placements out of it.

But I need a break from that project. I’ve been staring at html code in Dreamweaver too long. Too many photo edits in Photoshop. Much too much time spent with Filezilla today.

-Bruno, Sask has official made it June 7th Julie Doiron day. The town of 600 was host to a sold-out show by Doiron this past Sunday at All Citizens, the Bruno artists’ centre run by visual artist Serena McCarroll and artist/musician Tyler Brett. The mayor’s accordionist husband Gilbert opened for Doiron. Watch the unveiling…. er.. untaping.

-Spending time listening to Foreign Thoughts from There Will Be Fireworks (at P4K), Pieces of You by Wolf Gang (at Neon Gold Records) and Strangers With History Are Still Strangers by Ohvaur (at Herohill).