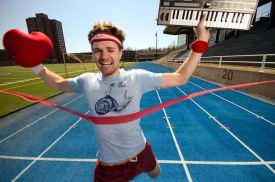 Who : Rich Aucoin from Halifax.

What : The song that is going to start off your weekend. Or, the montage song for Rocky 8 (have they made that many yet?). Rich Aucoin is working harder than ever putting together his next record. Operating his apartment like a community center, Rich has had tons of musician friends drop in and add their own music touches. Keep an eye on this guy. Eye mag voted him "Best Shows Of The Year" and Music Nova Scotia just gave him best alternative/group recording of the year (Personal Publication ). My friends from LA who were up for the Atlantic Film Fest were completely fascinated by Rich’s live performance at that festival.

Song : Brian Wilson Is A.L.I.V.E . I’ve been told by Rich that this version of this song (from May) is still in fetus stage and there have been changes. And there will be more changes. I’m partial to this version, but interested to hear what it might sound like on the new record.

« Has anyone seem this blog yet? » Andrew Bird in Nigel’s Basement