Bryan Scary and the Shredding Tears

I have never before found five different bios on an artist page. That is until I came across the homepage for Bryan Scary and the Shredding Tears. I like this one the best:

The suburbs of Chicago moved from Bryan Scary when the ‘massive’ (Playgirl, December 2007) rock star came to New York City, following in the great tradition of other such legends as Bob Dylan and John Lennon. His first words after getting off the plane were, “Is that all?” He attended the prestigious New York University, where he turned down an offer to “hang out” with the Olson Twins. While at school, he taught himself to play the piano, the guitar, the bass, the drums, the flute, and the cello, but he’d prefer you think of him as “just a pianist.” (Hottest Stars of ’07, 2007).

For fans of ELO and late-period Beatles (I hear some Ringo songs primarily), I recommend you take a listen to a couple of their tracks. You can hear a bunch on their myspace page.

The Blood Club and Ceiling On The Wall. Its really catchy indie pop, maybe it will add some sunshine to your day??

The band is set to release their full length disc tomorrow on Black and Greene Records. 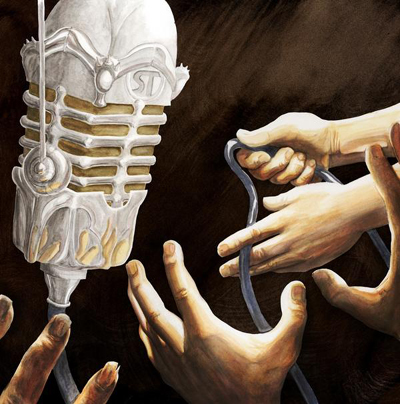