Zeus: From the musical friendship of Mike O’Brien and Carlin Nicholson, who have been touring together in Jason Collett’s (Broken Social Scene) backing band, comes their debut EP (Sounds Like Zeus) out June 2nd on Arts and Crafts. ‘Zeus draws upon classic influences to craft timeless songs, complete with fuzzed out guitars and shimmering harmonies’. Try a sample, download the song ‘Marching Through Your Head‘ for free here. 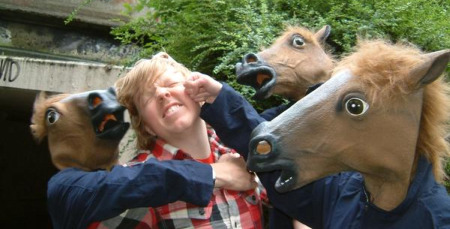 George Washington Brown: I recently started following The Catbirdseat feed, which I might add is full of gems. Great mix of tipping us to new music or albums they are releasing themselves on Catbird Records. Here’s one of the latter, an EP from UK’s George Washington Brown. Try on A Guess, Rewind.

Doveman: Breathing Out (from Stereogum). Good mix of delicate instrumentation and whispered vocals. Doveman (Thomas Bartlett) is currently touring as a member of The National and plans on releasing an album this year with Brassland.