Dont You Know by Elephant Stone 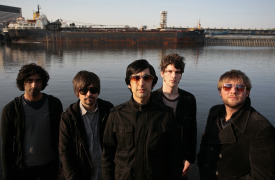 Who : Elephant Stone from Montreal.

What : A song from the debut of Elephant Stone (The Seven Seas ), a five-piece led by multi-instrumentalist, ex-High Dial and probably one of the nicest people I’ve ever met in the music industry, Rishi Dhir. Blending an obsession with perfect pop songs and the trippiest raga, The Seven Seas emerges from Rishi’s back-catalogue of songs written over the years. While not recording his own, we’ve heard Rishi playing sitar on records by The Black Angels and UK’s The Earlies . The Seven Seas features friends from The High Dials, The Besnard Lakes and The Dears , produced by Jace Lasek .

Song : Don’t You Know . Trip to the sitar breakdown near the end.

« Peter Broderick » Keep The Lights On by Wave Machines