Keep The Lights On by Wave Machines 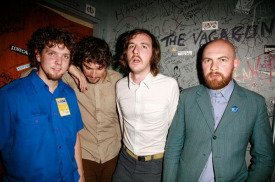 Who : Wave Machines from Liverpool.

What : You might want to put these guys on your radar. Some parts Hot Chip , some parts Beta Band and just the right amount of falsetto. Straight off a successful stint at SXSW , they’re headed to Glastonbury , Electric Picnic , Bestival and appearances at Liverpool Sound City and Dot To Dot festival . Expect the album (Wave If You’re Really There ) in June.