Faces On Film at Habitat House

Here’s some great video from a recent intimate attic session at the Habitat House in San Diego, where 60 people crammed up the staircase for a beautiful performance by Boston native Mike Fiore (aka Faces On Film).  Nada, of Friends With Both Arms, helped make this performance happen; a nice way of collaborating with one of her favorite artists who’s song “Friends With Both Arms” inspired the name of her blog.  The track “Harlem Roses” comes from his most recent record Some Weather, take a listen at his bandcamp.

Faces on Film ♦ Harlem Roses from Brandon Tauszik on Vimeo.

The video was shot by Brandon Tauszik, here’s a couple words on how he put it together.

“I had the video edited and picture-locked, but I felt it was still lacking that something it would take for me to want to spend 4 internet minutes viewing it. So I tried a bunch of different ideas, effects, techniques, whatever. Nothing worked so I decided to bust out the VCR. Here’s the workflow: 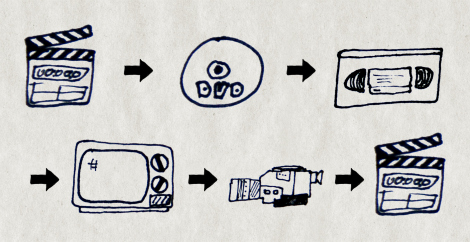 Export video from Final Cut > burn DVD > play DVD into VCR and record to tape > play back tape on old tube TV > record playback on camera > import footage to Final Cut and overlay on original footage = KAZAM, a lo-fi, drowsy, spacey piece that is (ideally) a pleasure to view.”

Here’s how the original version sounds.

« New Music from Friendly Fires “Live Those Days Tonight” » Video: “Will Do” by TV On The Radio