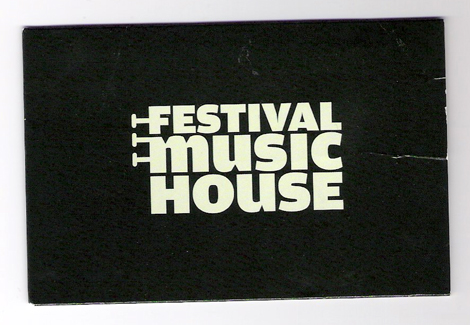 Last week we told you about an event taking place during the Toronto International Film Fest called Festival Music House. Three exclusive evening showcases of Canadian artists, with an emphasis on promoting Canadian music to the Film/TV industries domestically and abroad. As mentioned earlier, the event was essentially the newest model of The Canadian Music Cafe; which in previous years were exclusive afternoon showcases held at The Hard Rock Cafe and before that, The Rivoli.

This years event took place at The Roosevelt Room (in Toronto’s club district) and featured a diverse lineup including City and Colour, Gord Downie, Stars, Tokyo Police Club, Zeus, and Beast among others. Just about every band put on a great performance, which was happily received by the room of industry and music fans. Here’s a couple things I that went over really well. 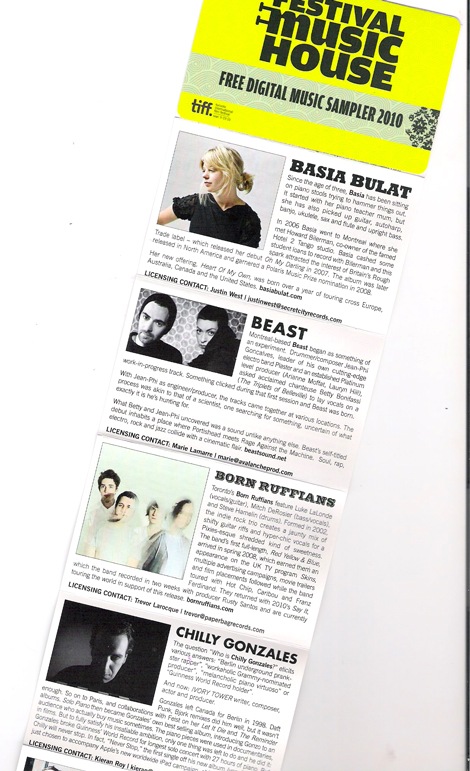 –Chilly Gonzales. Being both the guy with the new iPad ad an Feist’s producer, this musical genius was insane on the grand piano, performing informally in his bathrobe. At several points during the showcase, the loudness of talking and people entering the venue stopped him straight in his tracks or launched him into shouting tirades. Many of us thought he’d take a mic stand into the audience to beat someone. Once he was back into his songs, we enjoyed both his pure skill on the keys and his cleverly hilarious hip-hop lyrics. Not sure if his album would ever be in my highest rotation, but I’ddefinitelygo see him live again.

–The Racoons. The band on the lineup that no-one really knew. They’re a Vancouver based trio who are new on the scene and totallycaptivatinglive. Hold tight for more on this band, working on a post about them.

–Beast. Based on what I saw (and heard afterwards in peoples’ conversations), Beast put on the best show. It’s made me put their record back into my listening rotation. 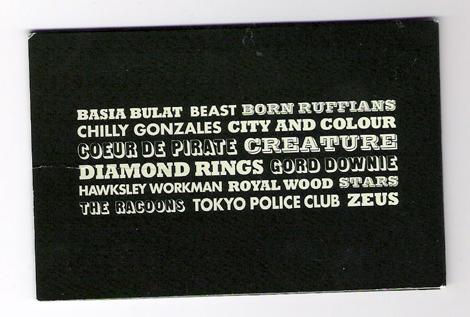 -Attract that perfect audience. Make sure that everyone who is invited to the showcase has some ability to help facilitate the use of Canadian musicians in the TV/Film/Advertising/Gaming industries.

-Focus on smaller/breaking bands who’s music lends itself well to licensing. From my experience, a music supervisor is more likely to license or ‘champion’ a lesser known band that blows them away live, than an established act that everybody already knows about. In many licensing cases, clout comes with those first discoveries. Besides, I personally don’t think artists like Gord Downie require this showcase opportunity to get their music heard by music supervisors