French Films On They Shoot Music 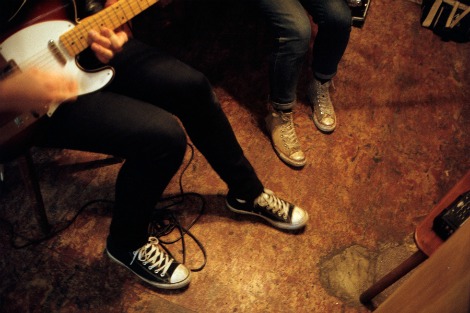 I really couldn’t describe this better than They Shoot Music does, so here’s how they paint the scene for this session with Finnish band French Films.

Just cross the street once and you are in a completely different world: That’s what happens if you leave the hip bars and music venues underneath the tracks of the U6 metro line behind and walk over to Weinhaus Sittl, a traditional Austrian wine tavern. The five Finns of French Films follow us on this short walk and take over the regulars’ table at Sittl for a short but – to say the least – intense performance. The crowd consists largely of elderly, solitary men – some drunk, some abstinent -, who obviously enjoy the welcome distraction, starting to clap along already when French Films set up their instruments. Yet that’s only the foreplay to what is the most energetic, blowing-your-head-away performance we’ve seen and recorded in a while. From the first chord of „You Don’t Know“ French Films literally rock the place. „We haven’t rehearsed this at all. Let’s see what happens, I have no idea“, singer Johannes says. Well, that’s the right spirit! „Pretty In Decadence“ is next and equally intoxicating: Let’s „wave the flag for the bloodsucking blues!“ We think French Films should indeed be regulars at Sittl.

Here’s “You Don’t Know” and “Pretty In Decadence”.