Where were you last night? I was waiting for you at Lees Palace and you never showed up. Was it the snow flurry that kept you in? Or was it Tuesday night laundry? For whatever reason it was, we only managed to get a half of Lees Palace full for Frightened Rabbit‘s first Toronto show ever. Some would say that’s quite an accomplishment for an International band touring in any market for the first time. But this is the same band that created The Midnight Organ Fight. If you’ve heard this record and missed the show, I hope you are beating yourself up over it.

About 2 years ago I first heard about this band on a music blog. A couple listens into Square 9 and The Modern Leper and I was hooked. It was something in their sound that I couldn’t quite put my finger on. Was it the dueling guitar lines, the references to celtic or folk sensibilities or Scott Hutchison’s truthful lyrics? Probably a combination. Enough to make me want to hear more and catch them at SXSW ’07 live.

I brought a couple music supervisors to their set at the Mohawk as part of the Hot Freaks showcase. I’m not sure if their set translated well to the first timers I brought, but then again, you’ve gotta basically set yourself on fire to get noticed at a music festival like that. I thought their set was killer, probably because I knew most of their songs well enough to sing along to the choruses.

Since that time, the band went back into the studio and worked on the follow-up record to Sings The Greys called The Midnight Organ Fight. Produced by Peter Katis (Interpol, Spoon, The National) and released by super-indie FatCat records, the band saw their profile increase exponentially. This led to increased international touring along with critcal acclaim for the record. Rarely do I hear of bands that are so consistently passed along word-of-mouth. And for good reason.

Their live show last night was an experience. The band, now a touring 4-piece, were started their set off strong with songs like I Feel Better and The Modern Leper. And the room responded. People moved in closer, sang along and I couldn’t even hear people talking at the back of the bar. These Scots commanded our attention and delivered. During one of the song breaks I yelled out “Music Now”, having the lead singer say back into the mic “Old School…”. Sure enough, a couple songs later the band took my request and performed that oldie from Sings The Greys. The band finished their set with Keep Yourself Warm that reminded us “… It takes more than fucking someone to keep yourself warm.”.

Have I got you interested a little? Well, the band is currently selling a disc of their live songs called Lung! Liver! FR! (check iTunes), recorded one night in July at a hometown gig. Here’s one of the tracks called The Twist.

So, can I count on you to fill that room the next time the band comes through this city? Yes? 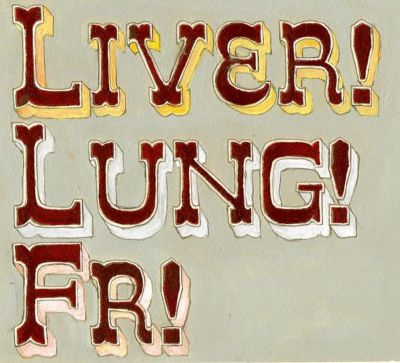