How to behave in a library…. in Japan

I was howling at this when Evan Jones and I watched episode after episode of Silent Library on Youtube.

Here’s the concept. Its a Japanese gameshow where 6 people sit down at a table in a library and are forced to do horrible things to each other. Each time there is a new punishment, awarded to the unfortunate person who turns over the giant playing card with the skull and cross bones on it.

Here’s the catch. They can’t make any noise or talk. Part of the hillarity of the show is watching the players trying so hard not to break out laughing.

Check out this episode, with famous K-1 fighter Ernesto Hoost as a guest. I think its the 4th one in, but take a look at ‘slapping machine’. Its amazing how annoyed they eventually make the other actors in the library. And what is up with the Karaoke at the end? odd. 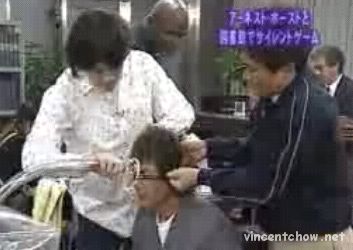