I wish I had more time to work on this post, but here’s a rough idea of what I like this week. Note that CMW now calls the festival portion CMF, details of all the showcases here.

Before I get to the CMF picks though, also note that Charles Spearin is putting on his Happiness Project tonight and tomorrow night at the Music Gallery. Details here.

Musebox/Eye Showcase at the Gladstone. Bands start in that order down from 9pm. 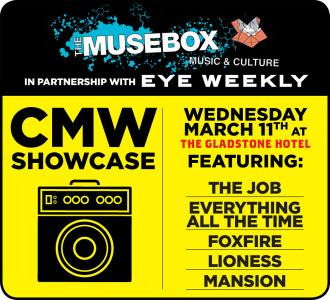 CMW Kick Off Party at Tattoo. 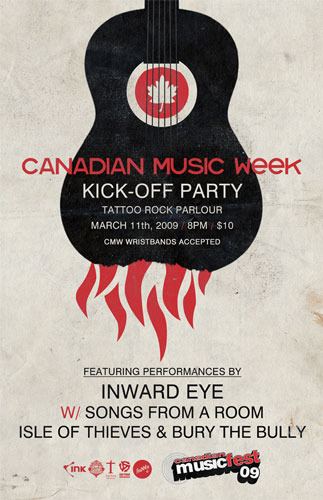 9pm: Laura Peek and the Winning Hearts at Clintons, Emma-Lee at Glenn Gould studio, Ketch Harbour Wolves at The Silver Dollar, The Rest at Sneaky Dees.

11pm: David Martel at Clintons, The Week That Was at The Gladstone, Ruby Jean and the Thoughtful Bees at The Drake.

11:10pm: Gentlemen Reg at The Horseshoe

Midnight: Malajube at the El Mo

1am: The Rural Alberta Advantage at The Gladstone.

9pm: Dinosaur Bones at The Horseshoe, An Horse at Tranzac, Emma-Lee at C’est What, Hooded Fang at Gladstone.

10pm: Ladies of The Canyon at The Rivoli.

11:10pm: Human Highway at The Horseshoe

1am: D’Urbervilles at The Silver Dollar, Amos The Transparent at Rancho Relaxo.

Midnight: Bryan Scary and The Shredding Tears at The El Mo