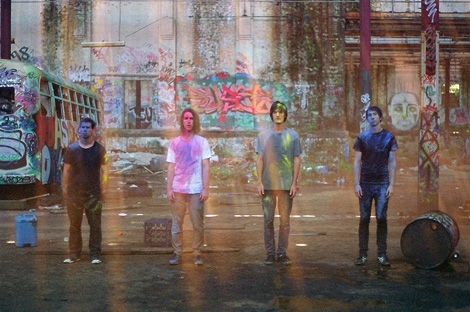 Hailing from Sydney, Australia, Parades is art-rock foursome who have recently signed to the independent label Dot Dash. The record came together DIY. Band memberJonathan Boulet (who has put out records on Modular) chose to produce their debut album in his garage. The result ‘achieves a dynamic whitewash of pop harmonies, post- rock guitars and electronic meanderings’, or what some are describing as an unhinged jam session. Coming up, the band will be doing dates withSally Seltmann and Passion Pit in Australia.

Check out their track Past Lives. For more, dive into the paint-fight video for “Loserspeak In New Tongue” (recommended for fans of Local Natives).
[itunes link=”http://itunes.apple.com/us/album/lung-full-of-light/id368155887?uo=4″ title=”Parades – ‘Foreign Tapes'”]

Parades – Loserspeak In New Tongue from Parades on Vimeo.