It happened on the beach, 70 people looking on…

For anyone who wanted to know how the sparkler bomb went, take a look at these pictures. The man standing next to the giant flame is no other than Tony Stecca, Goderich mayoral hopeful in 2020 and someone most often described as ‘too weird to live, to rare to die.’

We spent a couple hours preparing this year’s materpiece. As the sparklers were being ‘shucked’ from their packages, a few of us pondered the design. We settled on what we’d eventually call the ‘Stairway to Heaven.’

We took a wooden beam and attached a four foot high metal scaffold to one end, leaving the other end on the ground. This allowed the beam to sit on a 45 degree angle. Then three grooves were cut into the wood to hold the three different sparkler bombs. The lowest groove was referred to a position one, the highest groove as position three.

Here’s how it went down.

At shortly after 2:30am on Sunday morning, we lit the three bombs simultaneously. The fuse on the bomb in position two failed 30 seconds in. Tony tried to re-light, but eventually backed away from the explosion of light. Number one went first, then number three went, setting off number two by proximity.

Fantastic!! That sums it up. 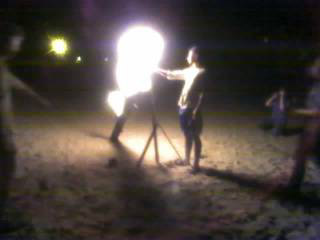