I’m sitting here with a couple post it notes trying to piece together the week I’ve had in Austin. Most of it is coming back to me, but not all of it. The one memory that really sticks out though is what happened on saturday night after most of the official showcases were finished.

A couple of us left Antone’s shortly after 2am looking for something to do on our ‘last night’ at SXSW. Was there a vice party somewhere?? How the hell do we get there? I was running on fumes at this point. I just wanted to find some place to grab that one last Shiner Bock and wind down.

Thank you Jon. You are the king of keeping nights going.

We found sanctuary. A house party in the middle of downtown Austin. Tons of free beer, places to sit down in the kitchen and relatively lax security at the door (we got in by hinting that we were with the Dears….). Then I saw her. Amy Winehouse. In the kitchen with her manager. We walked in and sat down with the pair.

I knew I’d never really be able to fully explain how this whole situation felt to me at the party. It was a combination of a slew of things that were slightly odd or off. And at this point I was really way too drunk as well. Here’s what I remember.

Amy’s manager sitting almost on her lap giving Amy the pep talk of his life saying things like ‘You’re going to be huge, Amy!’ and ‘Don’t let anyone tell you what to do’. A caricature of Spinal Taps manager I agree….

This party had a coke room. It was the one with the red light and the taste of sketchiness in the air.

Jon trying to get a polaroid of Amy while she was sitting with us. Initially, her manager refused, but after applying some lip gloss, Jon got approval from Amy to take a shot. Which turned into a series of photos. Amy used her sharpie to draw thought and word bubbles on the photos. (I wish I was close enough to read what they said…).

oh, and I think Amy was the most fucked up at the party by far. All I know is she spent some time in the room with the red light. Would I be the first to suggest a name change to Amy Cokeparty? Didn’t see any wine in that particular house.

We made it to around 5am and called it a night and the official end of SXSW ’07. 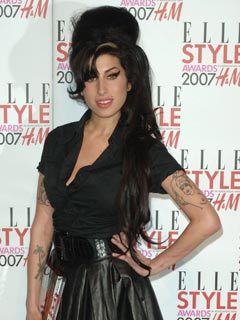