I turned 30 this weekend. And I’m handling it pretty well so far. To celebrate this, I could find no better way than organizing a dodgeball tournament, then going out drinking with my friends, teammates and opponents. And at one point late in the evening, at the Ukula Store on College, my mind told me this song playing in the background (even though I know it wasn’t). It fit the moment; I remember it being loud and I had a head full of booze. That song in my head was I Don’t Always Know by Ladyhawk.

Their new record comes out March 4 on Jagjaguwar, its called Shots. Canadian tour posted, US dates on the way.
It was interesting to read that this record was recorded over a period of two weeks in an abandoned farm house behind the shopping mall in the band’s childhood hometown of Kelowna, British Columbia. I spent 6 days in that town there a couple years back. Ate Calamari for the last time ever in a restaurant that turned out to be a strip club. But thats another story. 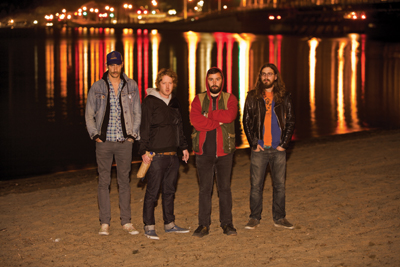 « What about Mark Szabo? » Ever heard this song?