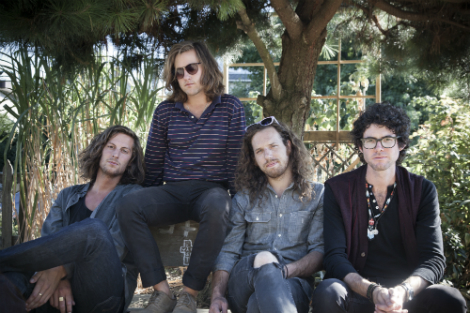 Vancouver-based Yukon Blonde are gearing up to release their newest full-length album, Tiger Talk set for a March 20 release with Dine Alone Records. The first single (“Stairway”, below) has the band sounding the poppiest I’ve ever heard them, and will be release on 7″ vinyl January 31.  The band are currently in the midst of a world-wide tour, look for them soon in the US on their way down to SXSW.

The Colin Stewart (Black Mountain, Ladyhawk) produced record features tracks that are short and punchy, as the band ‘trimmed the fat and packed hooks and brisk tempos into streamlined arrangements’. Trading in the analog tape of their past work in favor of a crisp digital approach with synthesizer flourishes, this sounds like a positive new direction for the group.  Not that they were doing anything wrong before, but perhaps they’ll be able to shake that too often used comparison to Fleet Foxes.

Grab the song at their soundcloud.