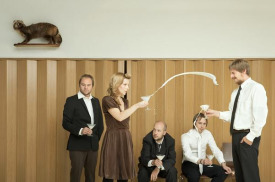 Who : Pooma from Helsinki, Finland.

What : You hear about this sort of thing from time to time. Band starts to gain some traction. Label notices and signs band. Label goes broke, band is back to square one. Pooma , Helsinki’s shoegazing best-kept-secret, had this happen to them last year for their album Persuader . Musically, their album doesn’t just evoke walls of distortion and reverb, but elements of pop, electronica, filled with strings and the dreamy voice of Tuire Lukka. For fans of Sigur R򱺀strong> , Mew and M�trong> (album was produced and partly mixed by Gunnar ղn Tynes of M�trong> ), help them out and spread the word to the blogosphere.� And if you got a min, check out the scuttling deer corpse on their homepage .� Interesting.