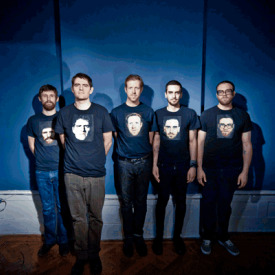 Who : Gigantic Hand from Brooklyn, NY.

What : From their debut album ‘Permanent Skin ‘, check out the focus track SuAnne Big Crow from Brooklyn’s Gigantic Hand . Started in 2003 iin Detroit as Kris Kaczor’s acoustic endeavor, the band took more shape after Kaczor moved to NYC in 2007 and collaborated with Rory O’Connor (drums/keys) and Kevin Bayson (bass/trumpet). From what I’ve heard, its an interesting listen, look for the album on Triple Down Records on the 24th.

Song : SuAnne Big Crow . Reminds me of something between Grizzly Bear , Bishop Allen and The New Pornographers .