We are under a month away from this years NXNE Music Festival and they’ve just announced the third wave of bands for the 17th edition of the festival, taking place in Toronto from June 13th until the 19th.

NXNE has just confirmed that hardcore heroes FUCKED UP and glam gallant DIAMOND RINGS will join the Yonge-Dundas Square (YDS) line-up that includes previously announced acts such as Devo, Stars, The Pharcyde, Land of Talk, Digable Planets, Descendents, OFF! and Men Without Hats.

Men Without Hats will also play an intimate club show on Thursday, June 16 at The Great Hall in addition to their YDS performance – and Fucked Up headlines the NOW Magazine showcase on the same night, at Wrongbar.

Tickets are online, see the full list of artists here. 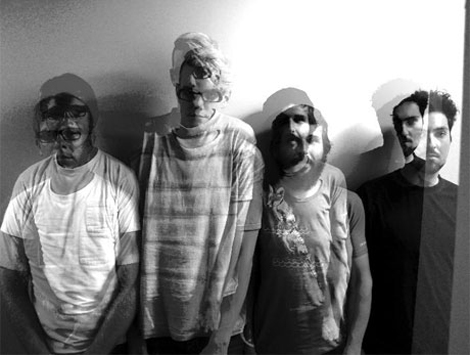 Last week I read that Toronto band the D’Urbervilles had called it quits after their homepage and twitter were proclaiming “The D’Urbs Are Dead” and “R.I.P. thedurbs.ca”.  Well, turns out the band isn’t dead, the name is.  This John O’Regan (of Diamond Rings) fronted band is now called Matters and will be releasing their debut single (Get In Or Get Out) on limited edition 7-inch vinyl via O’Regan’s Hype Lighter label April 5th.  Look for them live in Toronto and surrounding areas with grunge rockers PS I Love You around that time, full length album in the fall.

Check out “Get In Or Get Out” and “Wild Steps”.

MATTERS – Get In Or Get Out from Jared Raab on Vimeo.

Video: “It’s Not My Party” by Diamond Rings

“It’s Not My Party” by Diamond Rings, filmed in the nightscapes of Toronto’s west, in high heel shoes.  Found at We’re Not Broken.

Whether its The Graduate or Garden State, moving picturesneed moving music. Festival Music House offers membersof the film and television industries a golden opportunity toexplore Canadas wealth of musical talent during theToronto International Film Festival.
In its first year under the nameFestival Music House, this event is the newest incarnation of what used to be called The Canadian Music Cafe, which has run in Toronto during the Toronto Film Festival for the past couple of years. The intimate shows over the next few nights will feature a combination of established and up-and-coming Canadian artists and bands performing for an exclusive list of professionals who work in Film, Television, Advertising, Gaming; specifically individuals who find themselves in the position to license music. Also in attendance are Music Supervisors from ourneighboursto the South and tons of International Delegates in for TIFF.
and I’m on my way to check it out. Check back for updates.
Here’s the lineup:
September 13
11:45pm Stars
10:45pm Basia Bulat
10:00pm Coeur de Pirate
9:15pm Chilly Gonzales
8:30pm Royal Wood
+ Famous Players DJs
September 14
11:45pm City and Colour
10:45pm Tokyo Police Club
10:00pm Hawksley Workman
9:45pm Creature
8:30pm The Racoons
+ DJ Vaneska
September 15
11:45pm Gord Downie
10:45pm Zeus
10:00pm Beast
9:45pm Born Ruffians
8:30pm Diamond Rings
+ DJ Mikey Apples

Now in its 16th year, NXNE is set to hold its annual music/film/interactive conference and festival on the week of June 14th-20th. It puts 625+ international and local bands on 50 stages, screens 40+ films, populates Conference Village sessions with groundbreaking keynotes and inspired panel discussions, and breaks ground in the interactive media arena. From small intimate shows to stages at Lester B. Pearson International Airport and Union Station, to free open?air concerts in the heart of the city at Yonge?Dundas Square, the NXNE experience permeates Toronto.

As always, I’m really looking forward to the shows. This year features performances by Iggy and the Stooges, The Raveonettes, Sloan, Japandroids, Surfer Blood, The Soft Pack, Avi Buffalo, Timber Timbre, Diamond Rings, The Besnard Lakes and Free Energy, to name a few. I’m also psyched for the Interactive element of the festival, called NXNEi. This will be its first year, aninteractive media conference and workshops programmed in conjunction with FITC to bring the key players in new media innovation for featured talks, frank discussions and community?voted panels.

For more info, and info on passes, visit NXNE.