This weekend folks, go check it out.

Field Trip is one of Canada’s fastest growing urban music and arts Festivals. Launched in 2013 in line with the celebration of producer Arts & Crafts Productions 10th Anniversary, the Festival occurs annually in June in the heart of downtown Toronto at Fort York & Garrison Common. Providing a stage for local and international artists, Field Trip has featured headliners Broken Social Scene, Feist, Interpol and The Kills. The annual festival is produced by Arts & Crafts and Live Nation Canada. For more information visit: FieldTripLife.com.

A Night Of Music Memories

Does hearing a certain song bring you back to special or specific moment in your life? Can you close your eyes and imagine where you were when you first heard it? Was it in your parents’ basement, your best friend’s car in high school? A crazy-memorable concert you will never forget? These memories are important and can be life changing as they stay locked in the back of your mind. That’s why Music Therapists utilize these songs as a form of memory therapy. They can be the key in helping people who suffer from dementia or patients who have experienced a brain injury.

Every once in a while, I get an invite to something I just can’t turn down.

Last night, I was able to attend the launch party for Samsung’s Galaxy S6 at Sound Academy, where Alt-J (∆) performed as a surprise guest.  It was a short 45 minute set to a mixed room of fans and telecom industry folk, and featured great performances of their standout singles “Left Hand Free”, “Breezeblocks” and the show opener “Hunger of the Pine”.

All I needed was that opener.  Wow, what an incredible song.

More photos over at Indie88

I’m happy to share some news today from Do416, who are not only celebrating their 1st birthday, but starting a great (and FREE) 5-part concert series called Discover 416.  In conjunction with 416 Local Lager, the first show goes down of course on April 16th (get it? 4/16), is co-curated by do416 influencers Indie88Toronto + Arts & Crafts, featuring Fast Romantics, Ain’t No Love, DCF & SEX TAPE.

RSVP before midnight tonight. One lucky fan will win $100 to the Amsterdam BrewHouse. 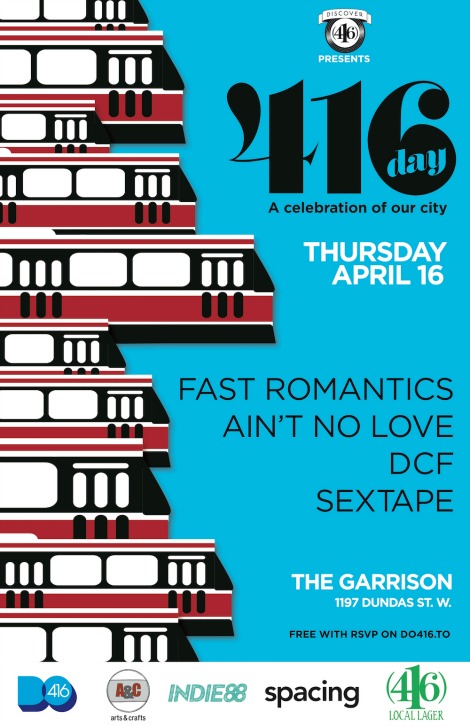 Break the fine china, because Kelp Records is celebrating their 20th anniversary!  Conceived in 1994 in a basement in Fredericton, New Brunswick, and named after the pulpy seaweed that populates the province’s south coast, the record label has spent the last 15 years planted in Canada’s capital of Ottawa.  Helmed by the towering and unassailable Jon Bartlett, the label’s twenty years has seen spirited highlights with 20-ish bands and artists (including The Acorn, Jim Bryson, New Country Rehab and Measha Brueggergosman, to name a few), 76 releases and endless DiY tours and events around the world.  Most recently, Kelp has grown into Kelp Music, branching out into management (Measha Brueggergosman, New Country Rehab, Andy Shauf, Evening Hymns), among other artist services.

Kelp are bringing the party to Toronto this thursday.

Care of Kelp Records, I have one pair of tickets to give away to one lucky winner.  There is only one way to enter.  Email me at chris AT indiemusicfilter.com with “KELP” in the subject line with your full name in the body.  Deadline is THURSDAY, MAY 29TH at NOON (EST).  I’ll notify the winner that day.