If you are in Toronto this weekend, be sure to buy tickets to the Over The Top Festival. In its six year, the festival has grown to host over 20 shows at 7 venues, over 4 nights (May 3-6), now with film, theatre and visual art. Great lineup to. Daniel Johnston, Matt & Kim, The Meligrove Band, Page France, Hylozoists, Julie Doiron, The Fancy Claps. The list goes on. Concert goers will be making tough choices on which show to hit. Check the schedule here.

A friend recently turned me on to Rich Aucoin (not this guy). Check him out, great songs there (which you can download). 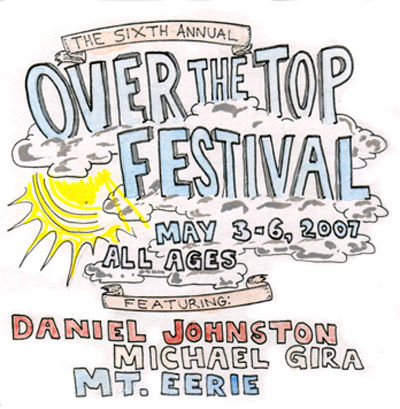 If you read my previous post about the Hylozoists, picture me near the same spot on the Harbourfront, only its slightly muggier. I’ve got some sweat beading on my nose. Sarah Liss has just come out to introduce the Bell Orchestre. I’m psyched.

I?ve never seen this band before, but I?ve heard their name many times. Whether it was on the bill for Arcade Fire tours (Bell Orchestre‘s Richard Parry and Sarah Neufeld play for as well) or positive reviews in media when Recording A Tape In The Colour Of The Light was released on Rough Trade in 2005. I simply never took a listen to their music, for one reason or another. Now, like many bloggers have done to other bands in the past, I’m wondering why I hadn’t jumped in there and found this great band and their music?..

I think fate wanted me to see the band on this day, and not a single day before.

I noticed the band was wearing all white. This is something I expected the Hylozoists to be doing, as the time when I saw them at Pop Montreal last year, they had the same thing going on. Like the Ladies and Gentlemen (Small Sins) as well. White is the new Lou Diamond Phillips.

The drummer sat at the drum-kit/small-percussion-instrument-depot and started pounding away, kind of like warming them up, as the rest of the band tested their respective instruments. What had collectively sounded like five people line-checking, slowly melted into the intro to their first song of the day.

Its a time and place sort of sound. Could this music work well for a dance party? No. Could you put your headphones on and discover this band while watching the rain? Very probably. The band to me really act like composers, and listeners. All are content with creating their own score ad hoc, while it was evident that they were listening to their partners intrepretations and building off that. Many times throughout the performance, the combination of instruments (bass, violin, french horn, trumpet, drums, pedal steel ) created wonderful group sounds, as songs seem to lead up to these moments, hold, then slip away.

As I’m sure they’ll always have people using the Arcade Fire reference in describing this band, on a whole they really don’t that much the same. Except for Upwards March. Listen to how the strings lead you into the song, and later how the kick drums hits 4-on-the-floor like many Arcade Fire outros.