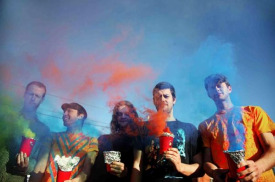 Who: Fang Island from Brooklyn, NY.

What: A quintet reaching that perfect spot where anthemic, soaring and chaotic all meet. The band began as an art school project while the band members were attending the Rhode Island School of Design (also the foundation for Yeah Yeah Yeahs, Les Savvy Fav, Lightning Bolt, Six Finger Satellite). With a common love of group vocal harmonies, handclaps, and making music for people who like music,Fang Island have an impressive self-titled debut, to be released February 23rd, 2010 via Sargent House.