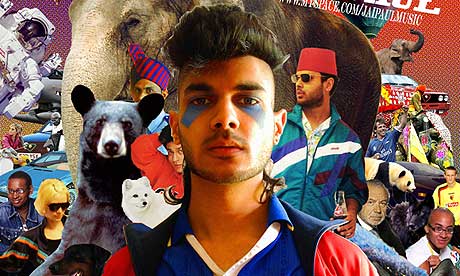 This song came back into my head via a post from David Taylor (of Media Arts Lab) on Selectism.com.  Jai Paul’s a London musician/producer who here combines synths, lasers, a simple yet heavy beat with delicate pop falsettos chiming “Don’t fuck with me”.

Check out the killer track “BTSTU” (via P4k).

So much to mention, I’ll get to it.

–RCRD LBL has a recently remastered version of MGMT’s ‘Destrokk’ from the Time To Pretend EP.

–Strokes lead singer Julian Casablancas is set to release a solo record called ‘Phrazes For The Young’. Head here for a preview. Or watch the vid.

-Speaking of Julians and prominent NY bands, Interpol front-man Paul Banks (aka Julian Plenti) has a couple new songs out there. Check Stereogum or his homepage.

-The new Dodos album leaked on to the net 2 months before the street date, so the band decided to put it online to stream. I haven’t had the chance to sit down with the whole record, but I’m warming up the the third track ‘Fables’, which P4k has online.

-Back to Stereogum, they have the song ‘Wet Hair’ by Japandoids on The Gum Drop. Have you signed up for this yet?

-And Ghostly are really forward looking. Check out their iPhone app. Very cool.

Ghostly Discovery from miguel on Vimeo.