The quietest day musically for me.

I started the day behind the Four Seasons Hotel for the BMI Brunch. ** A note to hungry SXSW goers: this party is full of an amazing buffet and no one checks the rsvp list to see if you are on it. You can wander in from all sides, grab a plate and start filling in that hole in your stomach that was filled with beer from the night before. I feel sorry for the artists that were performing. Not only were people too preoccupied with their breakfast burritos, the wind was blowing over the stage!

After we had eaten, drank our first two drinks of the day and lay in the grass for a while, we headed to Flatstock, a yearly tradition for me and one of the coolest things happening at this festival. I dropped $100 USD, $60 of which was souvenirs.

I jumped over to the Brush Square for the Australian Party, The Vines were on the stage. Playing their classics like ‘Get Free’ and ‘Ride’, I felt as if I was transported back to the early 2000’s. Still to this day, Ride is one of my favorite music videos. Rent a gym, invite all the local bands in town to learn your song and have everyone play together. Love how the drum part out of the guitar solo looks with all the drummers in formation.

I jumped into a car to find one of the +1 parties. This company was throwing a bunch of parties that week, two days earlier they denied my request to attend the Playboy party they were throwing. I headed to Hank Sinatra’s to see if I could get a chance to see The Morning Benders. Our timing was off, we missed them but managed to down a couple beers from the keg. And I watched my friend Jon get ‘boned’ by a guy named Matthias from New York (by boned, I mean having a chicken bone tossed off his leg on its way to the garbage can). Jon’s a vegetarian. He took it pretty well considering. Couldn’t even tell you who we saw perform though. Things were starting to get hazy.

We headed to the NXNE/Manitoba Bar-b-que afterwards for Canadian Beer, more bar-b-que meats and probably every Canadian who was down in Austin. Basia Bulat was great, The Choir Practice had problems quieting the crowd, Grand Analog were solid as well.

I spent my night at either Stubb’s or Maggie Mae’s (M for Montreal /Great Escape Showcases). Got a chance to see MGMT, who I thought were good. I got a sense that these guys were rushed into this biz we call music, and that the live show wasn’t quite top notch yet. The songs are though. Anytime I play Electric Feel I get people asking who these guys are.

Sia also performed at Stubbs. I had a moment when she sang Destiny. The headliners that night was N.E.R.D. Not my cup of tea but an amazing show nonetheless.

btw, headbands and mustaches are totally in right now. 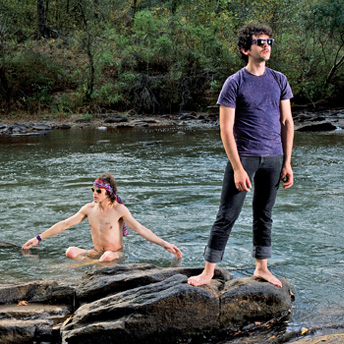