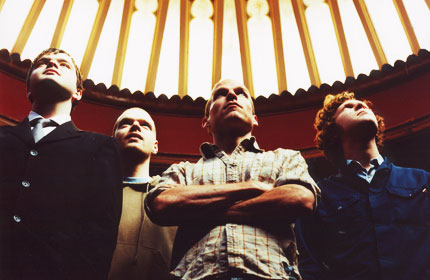 If I was to describe a band as containing former member of British Sea Power Eamon Hamilton, with the occasional backing from members of Sigur Ros, you’d probably picture something along the lines of winding musical tapestries that capture and build towards the precipice of a forceful crescendo. Both bands often produce lighter tracks with haunting or raspy vocals, before evolving into their full anthemic, stadium rock glory. You probably would NOT expect Country-punk… evoking reminders of acts like the Meat Puppets, Supersuckers, and Mclusky. And yet that is where the Brakes of Brighton, UK situate themselves on the musical scene.

Their just released 2nd album, Beatific Visions does blend a variety of musical leanings though, with tracks such as Isabel and No Return reminding of less aggressive artists such as Belle & Sebastian, Neil Young, or the aforementioned Sigur Ros. If you’re interested in songs that push you into a gallop though, tracks such as Hold Me In The River, Porcupine or Pineapple (which is on their myspace page), and Cease and Desist, will encourage you.

The band hits North American shores for a tour starting in LA on the 30th of May; they land in Toronto on June 12th at Lee’s Palace with Pela, and then Montreal’s Club Lambi on the 13th.