The Ghost Is Dancing

Saw a band called The Ghost Is Dancing at a converted Chinese Food restaurant called The Boat the other night. Whenever I walk into a room and see balloon animals, I get excited. I get even more excited when 6 piece bands like TGID ignite the crowd with pounding 4-on-the-4 breakouts, anthemesque singalongs and clever arrangements of accordion, keyboard and violin. Interesting bio note on their myspace page…

“There was only one solution. Six intrepid warriors of the resistance were chosen in the closing days of the War Against Rock; trained in the ancient arts of kung fu, ninjitsu, taekwando and paper-rock-scissors, these freedom fighters were sent back in time to early 2004 to rock out and perhaps build an army strong enough to take back the planet in 2009.”

Check out a track called To French Ave and keep an eye out for these guys and girl.
–

Side note: If you’ve seen The Wedding Crashers, and you know the classic lines well, then this is what would have happened if the brat had said “Make me a motorcycle, Clown!!!” . 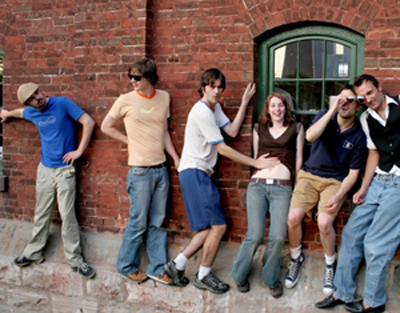